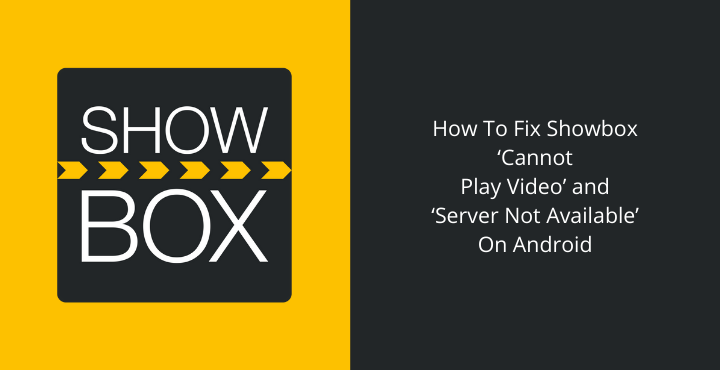 Despite the fact that it became popular after its initial release, it was removed from Google Play Store due to infringement of rules.

However, you can still install the app on your Android phone using an APK file (which you’ll obtain from a third-party website).

Now, you may be looking for a link to install the Showbox app, but we do not offer any links or sources due to the legitimacy of the app. The other reason is most of the websites that provide APK files have viruses (or malware) that can harm your Android’s software.

Although, we do provide resources to help individuals who are facing issues while using the Showbox app.

The most common issues you’ll face after installing the Showbox app on your Android are ‘Cannot Play Video’ and ‘Server Not Available’.

In this article, we will learn how to resolve the issues that occur while using the Showbox app.

Alert: Your internet browsing is fully visible and accessible by Internet Service Providers (ISPs). These companies can legally sell your personal information (or data) to third-party companies.

While using uTorrent for downloading and sharing purposes, it becomes essential to protect your data.

We suggest you connect to a VPN in such scenarios. VPN encrypts your internet connection and changes your IP, so the ISPs will not be able to identify your activities.

Why is Showbox Not Working?

Before we look for the issues within the app and resolve it, we have to look for whether your Showbox app is running or not.

If your Showbox app is already up and running, you don’t have to think about this… so you can skip to the next section.

But, if you’re unable to access the Showbox app, keep reading!

There can be a lot of reasons due to which Showbox doesn’t work as a stable app. However, we have concluded some of the reasons why you encounter such issues.

How to Fix Errors on Showbox on Android?

As we mentioned, there are various reasons due to which your Showbox app is not working.

But, have you ever wondered about the issues that come across while watching the videos on Showbox?

In this section, we will discuss those issues and how you can resolve them.

But, firstly, we will see the solution that mostly works for common issues reported by Showbox users.

Either it’s a Showbox’s error or any other, many times the issue resolved by simply restarting the phone.

Restarting a phone takes less than five minutes, while it can resolve many issues, such as configuration problems and memory glitches.

If it doesn’t fix the errors, keep reading!

If you’re a user who just started using the Showbox, then you must have encountered the ‘cannot play video’ error.

This error occurs because Showbox supports several video file formats, but it relies on a single video player to stream the content.

So, if you have installed a player that does not support the file which you want to play, then you will see an error something like ‘cannot play video’.

To fix this problem, you need to install a different video player that supports the selected file format.

MX Player is one of the best video players out there which supports a large number of video file formats and plays smoothly with the Showbox.

If you’re still facing problems after downloading MX Player, then we will suggest installing VLC Player, which is another popular video player among Android users.

You might be thinking, “How to integrate downloaded video players with Showbox?”

You don’t have to integrate it because whenever you install a new video player, Showbox automatically recognizes it.

Note: Download and install a video player, then restart your Android device. When you open the Showbox app, you can view the option of streaming movies through the installed video player.

The next common error is ‘server not available’. Many Showbox users reported to us that they are experiencing the error due to the app not being able to find a server online.

But, that’s not true! The ‘server not available’ error occurs because there’s a problem in your Showbox app’s cache memory.

To fix this error, you have to follow the steps below:

Step 1: Firstly, close the app and if possible, ‘Force Stop’ the app from phone settings.

Step 4: Once the process is completed, click on the ‘Clear Cache’.

Now, you can watch your favourite movies and TV shows on the Showbox app without any errors.

If clearing the cache doesn’t work for you, then you should try to update or reinstall the app. Sometimes, you’ll see the updates in the notification bar, otherwise, you need to update the app manually.

Showbox has an intuitive interface which works incredibly well compared to other streaming apps. You can watch the latest and popular movies, TV shows, series and access to a huge range of other content.

In this article, we have discussed a couple of errors while using Showbox, although you’ll encounter those issues occasionally.

We only support content streaming from legitimate sources. So, if you are trying to stream videos from pirated sites, then we are not responsible.

Have you ever faced the ‘Cannot Play Video’ and ‘Server Not Available’ errors? How did you rectify the issue? Do tell us in the comment section below.